Van der Zande led the #01 Cadillac V Performance Academy Cadillac past Oliver Jarvis in the leading #60 Meyer Shank Racing with Curb-Agajanian Acura DPi with 10 minutes left in the 2 hour 40 minute event when Jarvis was accidentally blocked in turn 3 by a GT Daytona Pro (GTD PRO) competitor. Once out front, Van der Zande pulled away and won by 3.509 seconds to claim the third win of the season for the #01 Cadillac.

The win, 10th in the IMSA WeatherTech SportsCar Championship competition for Bourdais and 17th for Van der Zande, came as a surprise to both veteran drivers.

Bourdais qualified the #01 Cadillac in fifth, and the veteran Frenchman admitted he struggled to master the fast and tricky CTMP circuit on his first visit. Then both drivers struggled with what they described as an intermittent and unpredictable problem with the Cadillac’s power steering.

“This race wouldn’t be ours,” said Van der Zande, who completed 123 laps of the 11-turn, 2.459-mile road track, located 60 miles northeast of Toronto. “We completely turned the car over after the warm-up this morning and didn’t know what to expect. The changes worked, but the power steering failed and that was the toughest part of the day.

“I knew I needed traffic to get around so it was maximum attack, full risk,” he added. “I thought, ‘Now is the time to go,’ and it worked.”

Bourdais turned down Van der Zande when asked to place the WeatherTech Championship race win decal on the victorious Cadillac after the race.

“That was all his,” Bourdais noted. “With the massive power steering problems I could barely last and I have no idea how he put that thing there to fight those guys. He obviously reads traffic super well, and when he gets all excited with emotions he uses that anger in a positive way. He really made it work today, and it was very impressive.”

Blomqvist and Jarvis finished second for the fifth consecutive IMSA race, a streak dating back to the event at WeatherTech Raceway Laguna Seca in mid-May. Consolation came in the form of reclaiming the WeatherTech Championship DPi points ahead of the #10 Konica Minolta Racing Acura, shared by Filipe Albuquerque and Ricky Taylor, who finished sixth on CTMP.

The #60 Acura duo now lead the No. 10 pairing by 56 points after arriving in Canada 17 behind. Bourdais and van der Zande moved up to third in the standings, 148 points from the lead.

“Our race car was very difficult to drive and we really struggled in traffic,” said Blomqvist. “We have learned some lessons and know that we can deliver performance over a single lap. But this hurts a lot and everyone is heartbroken because we think we should have won it.”

Pipo Derani and Olivier Pla completed the podium by finishing third in the #31 Whelen Engineering Cadillac.

“I just really enjoy this place,” Braun said. “It’s one of my favorite songs, and things just seem to flow our way when we get here.”

That proved to be the case again this year, as the duo took joint victory in the Le Mans Prototype 3 (LMP3) class in the #54 CORE motorsport Ligier. It was their fifth IMSA win at the Canadian facility.

The #36 Andretti Autosport Ligier JS P320 shared by Jarett Andretti and Gabby Chaves was fastest in qualifying, and the #74 Riley Motorsports Ligier manned by Gar Robinson and Scott Andrews led the first 90 minutes of the 2 hour 40 minute race .

But the Andretti car was delayed in the pits and the #74 crashed, leaving Bennett and Braun unquestioned for the finish. They won by 2.753 seconds over Andretti and Chaves, with Ari Balogh and Garrett Grist third in the #30 Jr III Motorsports Ligier.

“Jeff Braun, our race engineer, put down a really fast car and I drove a clean stint,” said Bennett. “Back then Colin was just a rocket.”

“A great day,” Braun added. “I’m really proud of those CORE motorsport guys. We had great pit stops and a fast car of course. Jon did a great job in that opening stint. ”

On the Canadian team’s return to the home track, Pfaff Motorsports extended its points lead in GTD PRO with a near-perfect flag-to-flag victory by Mathieu Jaminet and Matt Campbell in the #9 Porsche 911 GT3R.

Jaminet, who won the Motul Pole Award on Saturday, started the Chevrolet Grand Prix at Canadian Tire Motorsport Park on Sunday. He briefly surrendered the lead with 1 hour and 6 minutes to go in the two hour and 40 minute race when he made a pit stop after a 53-lap stint. Not long after, Porsche was back in the lead with No. 9. 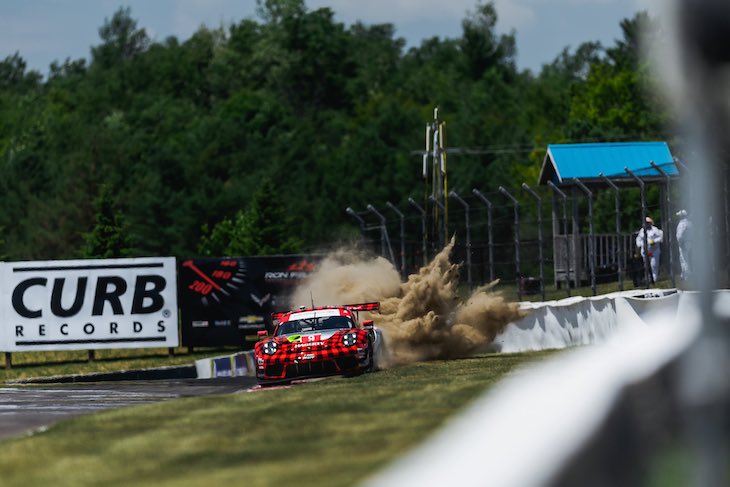 “It’s extraordinarily special,” Campbell said. “To get away with such a win is super special. (The team) put so much effort and work into this one race. We had so many supporters and fans this weekend. It was fantastic to see.”

After Jaminet’s stop, Campbell took over and brought the No. 9 to the line, 1.434 seconds ahead of the No. 3 Corvette Racing Chevrolet Corvette C8.R GTD, along with Jordan Taylor and Antonio Garcia.

While it may have looked simple, Jaminet said, it was anything but.

“It wasn’t easy, not at all,” he said. “Luckily it worked. Starting at the front was one of the keys today. Great work from the guys.”

Jaminet, Campbell and the Pfaff crew never wavered, even as the #3 Corvette and #23 Heart of Racing Team Aston Martin Vantage GT3, along with Alex Riberas and Ross Gunn, bravely battled it out. Sometimes the three cars were less than a second apart halfway through the race.

“It was tough,” said Jaminet. “The car was difficult to drive, but in the end we managed to keep everyone behind.”

After Campbell replaced Jaminet, Ben Barnicoat, who was off-pit in the #14 Vasser Sullivan Lexus RC F GT3, led the GTD PRO class. When Barnicoat carefully entered the pits with 59 minutes to go, Campbell re-took the lead for #9 and held off Garcia’s attempts to pass him.

“I could see he was pushing all the time, and I could see where he started looking at places when he was close to the restarts and things like that,” Campbell said. “I could see where the car was strong, but I always wanted to make sure I had a little bit of buffer and a gap to get into those places.

“I was just trying to manage the tires. It wasn’t easy up there to hold him off, especially at the end of the race, but we got there in the end.”

For Roman De Angelis, Maxime Martin and the 27 Heart of Racing Aston Martin Vantage GT3, the first sign that things were going well in Turn 1 on the opening lap.

At that time, the pole-sitting GT Daytona (GTD) #12 Lexus RC F GT3 was picked up by the running #33 Sean Creech Motorsport Le Mans Prototype 3 (LMP3). The Lexus suffered significant damage, requiring lengthy repairs that resulted in a final place in the GTD class.

The #12 accident opened the door for De Angelis, Martin and the #27 Aston Martin to start second in class to win the GTD race. But not without drama. Martin had Philip Ellis in the #57 Winward Racing Mercedes-AMG GT3 on his bumper for the last hour, the margin of victory only 0.493 seconds. 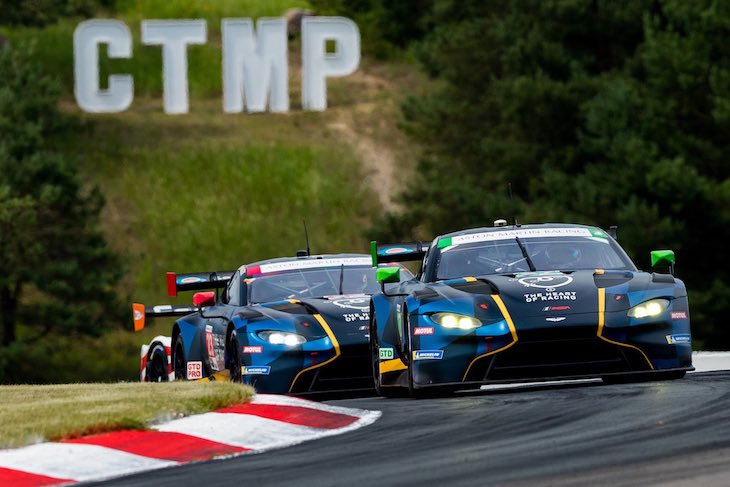 “It was very tough. The Mercedes was definitely big in my mirrors,” said Martin after the Belgian took home the third win of his IMSA career. “In the end it was very close. The Mercedes behind it was so fast, but a win is a win; we’ll take it. It’s fantastic for the whole team.”

Ellis, who was racing CTMP for the first time, gave it his all but couldn’t pass the Aston Martin.

“It’s a very fluid track, but because it’s so fluid, it’s also super hard to overtake,” said Ellis. “I feel like I could have had a little bit of pace on the Aston up front. I wasn’t really close enough to duck or make a move on him, so I kind of had to wait and try to force him into a foul, but Maxime never did. Should be happy with P2 this time.”

The #27 win gives the team back-to-back wins over consecutive weekends following their June 26 win at Sahlen’s Six Hours of The Glen. Sunday’s race only netted points for the IMSA WeatherTech Sprint Cup and not the overall season championship, but it didn’t detract from the sweetness for De Angelis and Martin.

“Definitely special to win here,” said De Angelis, a five-time WeatherTech Championship race winner who hails from Windsor, Ontario, and considers CTMP and Detroit to be his home circuits. “I’ve raced here a lot in the past, but of course it’s very special to win back here in Canada for the first time with IMSA. Great work from the team, great work from my teammate and good strategy all weekend.

“We’ve had a good run of results after some bad ones at the start, so we’re definitely on our way back. We’ve had two really strong circuits that we knew we would be competitive in, so we tried to take advantage of it.”