From battery technology to powerful compact electric motors, headlines around electrification seem to be all buzz these days. While we are undeniably interested in the future of electrified propulsion systems, the technical achievement of a clean combustion engine is a breath of fresh air. While other automakers have ambitious goals to go all-electric by 2030, Stellantis has identified the need for gasoline engines in the future, and the company’s goal of being 50 percent electrified in North America by then seems more realistic. Enter the Hurricane: a 3.0-litre twin-turbocharged straight-six.

The new power unit will fit into any vehicle currently sold with a longitudinal engine. When the Hurricane arrives under the hoods of several Stellantis-branded vehicles in the coming year, the direct-injection dual-overhead-cam inline-six will have bore and stroke measurements of 84.0 millimeters and 90.0 millimeters. The block and cylinder head are made of aluminum, and the cylinders are painted using a plasma transfer wire arc process that adds a thin iron coating to the cylinder walls, saving three pounds compared to using a more traditional iron sleeve, according to Stellantis. Those bore and stroke figures are identical to BMW’s high-performance S58 3.0-litre straight-six that powers the M marque and also takes the same approach of having each turbo fed through three cylinders to minimize turbo lag. The Hurricane will be offered in standard-output and high-output variants.

Stellantis says the standard-output engine will deliver more than 400 horsepower and 450 pound-feet of torque, with final output figures determined by the individual brands using the new mill. The lower-powered version has a compression ratio of 10.4:1, and the intake charge is pressurized by the twin turbos with up to 22.4 pounds of boost before being cooled by a water-to-air intercooler. The junior 3.0-liter revs to 5800 rpm and runs on 87 octane, although 91 is recommended.

The high-performance version will put out over 500 horsepower and 475 pound-feet of twist, putting it on par with BMW’s strongest six-cylinder offerings. The compression ratio has been lowered to 9.5:1 to accommodate the 26.0 psi of the larger turbos via a dual-inlet intake. The high-performance engine has its own cylinder head, crankshaft, larger water-to-air intercooler and forged aluminum pistons (versus the cast pieces of the standard output) and will rev slightly higher, to 6100rpm, though far from the glorious 7200rpm whimper of BMW’s singing six. It takes 91 octane to generate all this awesome power.

These engines can be used in a number of Stellantis products, such as the Jeep Gladiator, Grand Cherokee, Wagoneer, Grand Wagoneer, and Wrangler; the Ram 1500 and 2500; and the Dodge Challenger and Charger. If we were to speculate, we’d say the new straight-six will replace the classic – if wildly inefficient – V-8s we’ve come to love and the venerable Pentastar 3.6-liter V-6, but Stellantis just refused to say that. Nevertheless, we are excited to get our hands on the Hurricane in the coming months. 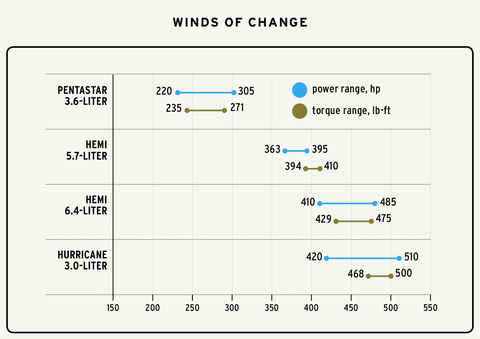 This content was imported from a poll. You may be able to find the same content in a different format, or you can find more information on their website.

This content was imported from a poll. You may be able to find the same content in a different format, or you can find more information on their website.